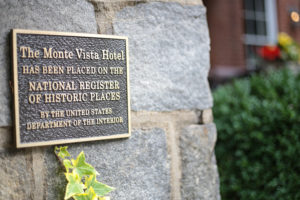 Welcome to the Monte Vista Hotel! It’s an exciting time for this charming and unique property, which is listed on the National Register of Historic Places. The hotel has recently celebrated its centennial anniversary.

The Monte Vista Hotel is located just outside Asheville in Black Mountain and is home to a lush landscape, world-class dining, arts and entertainment. Southern Proper Hospitality, together a few other Black Mountain partners acquired the hotel and redesigned the accommodations to create a comfortable and classically hip boutique mountain oasis. The hotel’s modern Southern restaurant, Milton’s Cuisine & Cocktails offers regionally inspired and locally sourced comfort food for visitors and area residents alike.

This one-of-a-kind boutique hotel features a vintage soul with impeccable craftsmanship, historical significance and tasteful, modern amenities. The main building, the original 1937 Wing, contains 33 rooms with preserved historical elements. The Lodge, the 1950s addition to the hotel, features 14 single queen rooms and a large “family room” and bar area that make this annex a perfect place for family reunions and celebrations.

The town of Black Mountain was recently named the “Prettiest Small Town Vacation in America” by Trip Advisor, and the Monte Vista Hotel complements the legacy of this special place.

The historic Monte Vista Hotel is a key component to Black Mountain’s storied past. Originally home to the Cherokee people, this valley became an early pathway west for traders, explorers and people seeking a new life beyond the eastern mountains. The town of Black Mountain grew rapidly after the railroad was completed in the late 19th century, and this new “railroad town” needed more lodging.

Lucien and Rosalie Phillips opened the Monte Vista in 1919, repurposing a former school building. In 1937, the current brick building was constructed, further cementing the Monte Vista Hotel as a central piece of Black Mountain’s civic and social life. The Annex, a separate structure located behind the original, was added in 1975. Though the hotel has since undergone complete renovations and new ownership, many of the original elements have been preserved, and the new decorative touches complement the look and feel of the original structure.

Southern Proper Hospitality will continue to maintain and honor the historical integrity of the hotel with future improvements planned for the property. 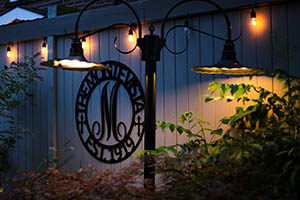 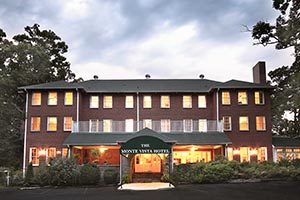 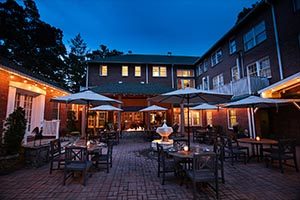